Fraudulent cryptocurrency offerings have taken their place alongside imaginary gas and oil wells, fabricated promissory notes and overseas investments, among others, as the basis for a new raft of scams. The allure of cryptocurrency-related scams relies on the same hooks as more traditional schemes: get in on the ground floor, don’t miss out, there’s no real risk, you’re guaranteed high returns, and why settle for low returns when you could be earning so much more.

Even the promotions are similar—online ads, social media, public solicitations, and personal, family, or group connections—along with the failure to mention the very real risks involved. Sadly, the outcome is mostly the same—investors left with worthless or non-existent holdings and significant, often irreplaceable losses of their hard-earned, much-needed money.

Of particular concern is crypto marketing, a scheme in which promoters of securities tied to cryptocurrencies recruit investors to pitch the investments, often to friends and family and through social media and blogs. In return, these investors are promised a generous return plus the promise of commissions on their sales. The problem, of course, is that investors are not licensed to sell securities, and are therefore in violation of securities regulations and subject to significant penalties.

What cryptocurrency promoters don't say is as important as what they do say. Common omissions include failing to provide a physical address for a business and providing no information on the financial strength of the business or the supposed expertise of the staff.

Another problem is that fraudsters use the Internet to give themselves an air of legitimacy.

Anyone can set up a professional-looking online presence that appears to portray highly skilled experts and flashy facilities. As an investor, though, it's hard to know who is really being depicted in those images.

The Enforcement Division of the State Securities Board uncovered a scheme where a promoter was using images from unassociated websites and falsely claiming that the photographs depicted the professionals at a firm, LeadInvest, that was selling investments tied to crypocurrency.

For example, a portrait of "Lucy Besson," allegedly responsible for cryptography and data analysis, was really a stock photograph of a model.

It got worse. A photograph of LeadInvest's Code of Ethics Association first appeared in an old photo taken at a conference at the George Washington School of Law. The photo, left, depicted U.S. Supreme Court Justice Ruth Bader Ginsburg and two former U.S. Solicitors General, none of whom, obviously, had anything to do with LeadInvest.

Another cryptocurrency investment firm, Bitcoin Trading & Cloud Mining Ltd., known as BTCRUSH, solicited Texas investors with the promise of huge returns from the mining of cryptocurrencies at three massive computing centers featured in videos on the company's website. 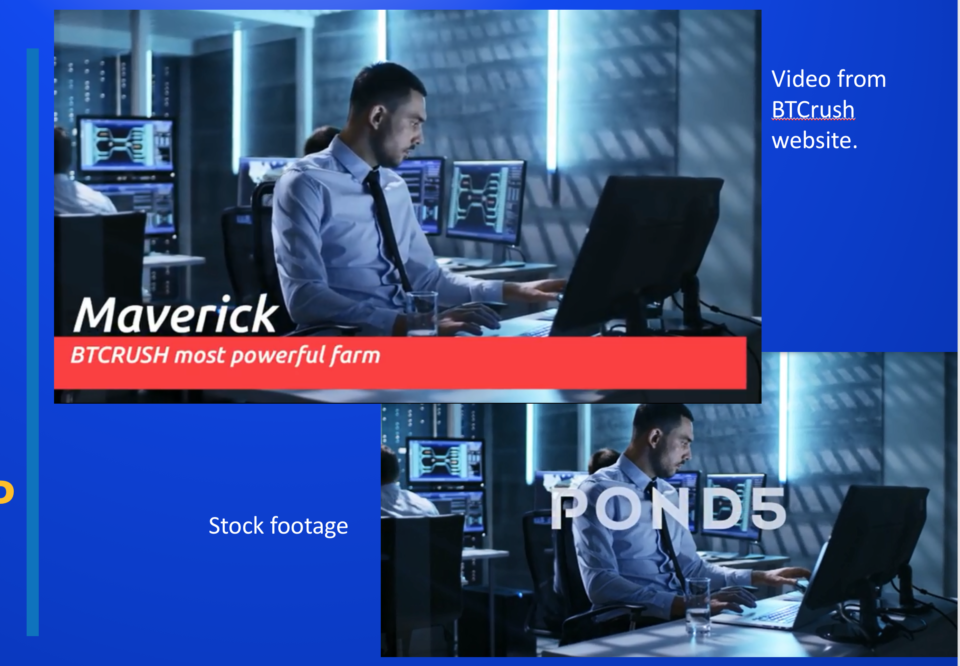 The videos were not evidence of anything, however.  As shown at left, BTCRUSH created the videos by manipulating stock footage available for sale on the internet from the company Pond5.

Next up: Enforcement actions

The Investor's Guide to Cryptocurrency Offerings was funded by a grant from the Investor Protection Trust and written in collaboration with Lightbulb Press.

Blockchain Is Not What You Think It Is: Cesare Fracassi of the University of Texas Blockchain Initiative explains the theory and science underpinning blockchain and how it's being used.