Gabriel Claudio Jr., who stole millions of dollars from clients of his illegitimate financial services firm in Corpus Christi, was sentenced to 25 years in state prison on Aug. 7 and ordered to 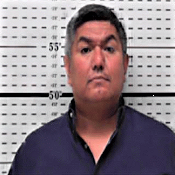 Claudio was sentenced in the 79th District Court of Jim Wells County after pleading guilty to first-degree felony offenses of theft, money laundering, and misapplication of fiduciary property. The restitution was ordered to be paid to investors in the South Texas counties of Jim Wells, Nueces, San Patricio, Cameron, and Bexar.

Claudio also used investor funds to pay off the mortgage on a house in Portland, in San Patricio County, and buy two Mercedes-Benz automobiles.

The petition for forfeiture resulted in Claudio and his wife, Briana Claudio, signing a judgment to forfeit the assets they acquired with investor funds.

Joel B. Johnson, a retired state district court judge, is the receiver overseeing the forfeiture proceedings and the liquidation of the Claudios’ assets to make pro-rated restitution payments to investors.

Claudio is a former licensed insurance agent in Texas. He was registered with the Securities Commissioner to sell securities – but only from 1997 to 2002. He was indicted in 2017 after an investigation conducted by the Jim Wells County District Attorney’s Office, the State Securities Board, and the Texas Rangers.

The Jim Wells County District Attorney's Office prosecuted the case with the assistance of Angela Cole, a Texas State Securities Board enforcement attorney who served as a special prosecutor.

Since 2006, two clients of Claudio’s, a married couple in Alice, had invested in indexed annuities through his firm. In 2010, however, Claudio falsely told the couple that they could no longer invest in annuities directly with the insurance companies selling them.

Instead, Claudio told the clients they had to write their checks to him, not the insurers. Between 2010 and 2016, the couple wrote 19 checks to Claudio totaling $2,393,567 to invest in indexed annuities.

The investigation found that Claudio did not make any payments to the insurers with that money. According to the notice of seizure and forfeiture petition, in August 2016 Claudio admitted to the victims that he had “squandered” their money and had provided them with “bogus” spreadsheets that supposedly reflected the purchases of annuities he had made with their money.

Claudio defrauded other clients, according to the investigation. From 2009 to 2013, Claudio sold fraudulent investments to at least nine victims, totaling $600,000.